Writing for Venous News, Paul Gagne (Darien, USA) notes that during the past decade, evaluation and treatment of iliac or common femoral vein obstructive disease have become more familiar and common. Based on the landmark work pioneered by Peter Neglen and Seshadri Raju published in 2006 and 2007, vascular interventionalists are now evaluating patients with advanced chronic venous insufficiency—specifically CEAP clinical class 4, 5 and 6 disease—for endovascular correction of iliofemoral vein outflow obstruction. This obstructive disease can be due to scar residual to acute deep vein thrombosis or from venous compression due to, for example, an adjacent artery, tumour, or spine.

Though it is generally accepted that intervention on patients with advanced chronic venous insufficiency due to iliofemoral vein outflow obstruction can improve the lives of many patients, there are unresolved issues regarding the details of when intervention is appropriate. The multicentre, prospective VIDIO study compared multiplanar venography (MPV) and intravascular ultrasound (IVUS) for diagnosing iliofemoral vein outflow obstruction. Completed in December 2015, data I presented at the 2016 American Venous Forum indicated that IVUS was notably more sensitive for diagnosing significant venous outflow obstruction than MPV. However, there remains persistent debate regarding what constitutes a threshold stenosis, which when stented, predictably results in clinical improvement. A 50% diameter stenosis on venogram has traditionally been accepted as a significant stenosis, while a 50% cross-sectional area reduction with IVUS was championed by Raju and Neglen in their seminal papers as predictive of clinical improvement when treated. To date, the comparative utility of these imaging studies using the customary 50% treatment threshold for stenosis severity have not been prospectively validated against clinical improvement.

I presented data during the 2017 American Venous Forum in New Orleans on an analysis of the VIDIO study database to define threshold stenosis for MPV and IVUS that when treated resulted in patient improvement.

The multicentre VIDIO trial prospectively enrolled 100 symptomatic patients (CEAP 4–6) with suspected iliofemoral venous outflow disease. Venous stenting for presumed significant iliofemoral vein stenosis was performed on 68 patients at the site investigators’ discretion. Each patient underwent baseline and post-stenting MPV and IVUS to compare the diagnostic and clinical utility of the tests. Based on imaging, stenosis was characterised as non-thrombotic (ie. compression) in 48 patients and post-thrombotic (ie. luminal scar, sclerotic vein contraction) in 20 patients. The Revised Venous Clinical Severity Score (rVCSS) was the clinical index for which anatomic imaging measurements were consistently related to patient outcome. A four-point reduction in rVCSS between baseline and six months was used as an indicator of clinical improvement for calculating sensitivities and specificities for MPV-determined per cent diameter reduction and IVUS-determined per cent diameter and area reduction. ROC curve analysis was used to determine the optimal diameter and area thresholds for clinical improvement. The validity of each imaging measure was assessed with respective areas under the curve (AUC), calculating p values estimating the probability that a measure was of greater value than chance alone.

At the time of intervention, IVUS appears to have better predictive utility than MPV for identifying iliofemoral vein stenosis in CEAP 4–6 patients that, when treated, results in significant symptom improvement. These findings for the entire stented VIDIO cohort corroborate the conventional 50% diameter or cross-sectional area stenosis threshold by IVUS as defining a clinically significant stenosis which, when stented, has significant predictive value for symptom improvement. In non-thrombotic patients, however, a higher threshold of >61% diameter stenosis may better predict clinical improvement.

Since the VIDIO study was not designed to answer the question regarding the best threshold stenosis to treat for patient benefit, I would emphasise that the results of this post hoc analysis of the VIDIO data-set must be acknowledged as being hypothesis-driving rather than a definitive answer to the question of optimum threshold. However, based on this analysis, a >60% stenosis due to compression in CEAP 4–6 patients may be the better baseline for considering iliofemoral vein stenting in order to improve patients chronic venous insufficiency. Clearly, further prospective studies are required to correlate intervention on venous stenosis identified using IVUS with clinical improvement to refine the clinical criteria for reliable improvement in patients with chronic venous disease. 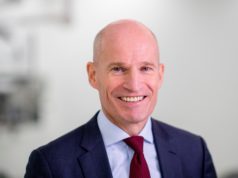 “The future is very bright for venous valve replacement”