In this article for Venous News, Dominik Heim spoke to Michel Perrin and Bo Eklöf about the founding of the European Venous Forum (EVF; 27–29 June, Zürich, Switzerland), an international symposium for venous specialists that this year celebrated its 20th annual meeting. In the run-up to the annual meeting, Heim (as the 2019–2020 president of the Forum) asked the question: who is behind the EVF?

Zürich hosts—in collaboration with the Swiss Society for Phlebology (SGP)—the 20th annual meeting of the European Venous Forum (EVF) this year in June. The 2019 EVF meeting takes place at the University of Zürich, in the most prestigious university building more than 100 years old. It will be another exciting get-together of more than 500 phlebologists, angiologists, surgeons, dermatologists and interventional radiologists from all over Europe, with further guests from the USA and Japan, to discuss the latest aspects of phlebology.

As a migrating event, the list of towns that EVF has paid tribute to is long—in fact, it is twenty city names long. It all began in Lyon, France in 2000, with Michel Perrin as the first congress President and Andrew Nicolaides as Chairman of the Board. Michel Perrin recounts the conception of this meeting: “In the Sydney airport lounge, professor Andrew Nicolaides, who was in transit on his way to Japan, approached me and said, ‘Michel, do you think it is time to create a European Venous Forum?’ I answered, ‘Give me five minutes to think about this proposal and get back to you.’ Five or perhaps 10 minutes later, my answer was positive. That was a genuine democratic process—but does a scientific society need it?”, he smiles. The EVF was established by Andrew Nicolaides, and its success and spirit has been sustained by Nicolaides and the meeting’s executive director, Anne Taft.

EVF was founded to follow the example of the American Venous Forum (AVF), Bo Eklöf, a former president of AVF tells me at our personal interview meeting in Helsingborg, Sweden last March. Perrin confirms this, stating that AVF “was the stimulus for the creation of EVF”. Perrin adds—laughing now, as he looks back at that first Lyon congress—“I did not care about an article published in a French vascular journal some months later, which stated that ‘Michel Perrin is a traitor, because he organised an English-speaking convention in Lyon: the Gaul capital.’”

From the very beginning, EVF imposed strict rules for itself: “Congress language is English. EVF provides a platform for discussion of all new advances and aspects of phlebology, with emphasis on education and discussion”. Out of all submitted abstracts, the best 30 are selected and presented at the annual meeting. The speaking time is strictly 10 minutes, followed by another 10 minutes set aside for the paper’s discussion. The ample discussion time may be a source of stress for the presenters, but “that is where the truth comes out” says Eklöf. For, that is its mission: “Education, scientific knowledge, research and clinical expertise of the highest quality and establish standards in the field of venous disease”. Its annual meeting, including this year’s congress in Zürich, is one of the formats EVF works towards. But, there are now many other additional EVF events. In 2010, Bo Eklöf and Peter Neglén started the EVF HOW courses with its unique structure, designed as expert-led events focusing on practical venous education. No more than 100 participants per event can attend from all over Europe, with a faculty of well-known specialists (the proportion of participants to faculty should be three to one), 24 working stations with a representant from the industry and a faculty member. There is also the possibility to review all the activities of the course during one year on an interactive website.

Based on the success of these annual EVF HOW courses, smaller courses and workshops have been developed and are taking place in different European cities since 2015: the so-called EVF HOW Plus courses. At these events, a very limited number of people is taught by specialists in their field on a particular topic, such as venous stenting, sclerotherapy and other treatments. What makes these courses and workshops so special? According to Eklöf, it comes down to “the very open atmosphere, where nobody is afraid of asking silly questions (that do not exist anyway). These events are unique, because they are very well-structured”.

There is something else that is special about EVF, namely, its guidelines. Since 2009, several internationally approved guidelines on different venous topics have been produced and published with work from the EVF. These guidelines have been developed in collaboration with other phlebological organisations and societies, in accordance with the mission of EVF to “establish standards in the field of venous disease”.

In conclusion, is EVF simply “a bunch of old men”? No, but perhaps rather “the wild bunch”, as seen in the classic 1969 Western movie by Sam Peckinpah.

Dominik Heim is a general surgeon and venous specialist at the Venenzentrum in Thun, Switzerland, and the president of the EVF in 2019–2020. 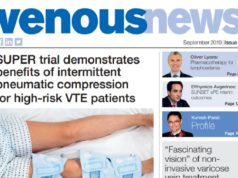