Writing for Venous News, Paul Gagne considers the future of intravascular ultrasound (IVUS) based therapies for venous leg ulcers (VLUs). He concludes that while studies of IVUS guided stenting to date “have moved the ball far down the field,” a randomised controlled trial “will move the ball across the goal line and change the paradigm”.

Patients with an active or healed VLU can have a single dominant or multiple contributing venous pathologies. Superficial, perforator, and deep vein valvular incompetence (VVI) as well as deep vein occlusive disease (i.e. post-thrombotic scar or extrinsic compression) can be singularly or collectively the cause of the non-healing wound. Additionally, patient and wound specific factors can be additive factors in promoting both the formation and delayed healing of VLUs. A sedentary life style, calf muscle pump dysfunction, wound infection and cellular senescence have all been implicated in impeding VLU healing. Though compression therapy is part of the VLU treatment algorithm, both patient compliance and tolerance as well as compression effectiveness are quite variable.

Finally, all VLUs are not the same. A small focal ulcer (Figure 1) with a dilated, and incompetent axial superficial vein in the ulcer bed, especially in the absence of diffuse skin damage, often heals and doesn’t recur following ablation of the superficial vein and resolution of the associated VVI. Limbs with VLUs and diffuse, near or totally circumferential induration, inflammation, drainage or lipodermatosclerosis (Figures 2 and 3) often do not respond to axial or perforator vein ablation alone for VLU healing, and if they do heal, the VLU recurrence rate is high in the near term. These patients often have iliac and common femoral vein outflow obstruction (IFOO) that must be treated if prolonged VLU healing is to be achieved.

Over the last 15 years recognition of the frequent role of IFOO in the pathophysiology of lower extremity chronic venous insufficiency (LECVI) and chronic venous ulcers has developed. Marston et al1 evaluated 78 patients with cCEAP 5&6 disease for IFOO and found 37% had a 50% stenosis and 23% had a >80% stenosis based on CTA or MRA. Female gender, a history of DVT and reflux in the deep venous system predicted a >80% stenosis in the iliac veins. This report suggested that IFOO can be a commonly present contributing factor in the pathophysiology of VLU patients. Our understanding of IFOO in these cCEAP 6 patients has expanded with the regular use of IVUS in deep vein imaging. IVUS is more sensitive for detecting the variety of occlusive pathologies (i.e. compression, intraluminal scar, intramural scar, or a combination) that can interfere with normal iliac and common femoral vein function.

Analyses in large cohort studies have shown that patients with clinical CEAP 6 LECVI and IFOO heal their VLUs 75% of the time following IFOO treatment with angioplasty and stent.2 However, since clinical improvement is not uniform, there is still uncertainty regarding which VLU patients will benefit from treatment of their IFOO. Rossi et al3 have reported that in a double-blinded randomised controlled trial, patients who failed to achieve VLU healing with conservative measures had a 90% ulcer healing rate following stenting of a 50% IVUS diagnosed iliac vein stenosis, compared to a 40% ulcer healing rate with continued best medical therapy. Though this positive trend did not meet statistical significance, likely due to a type II statistical error, this benefit in the stented VLU patients is consistent with the available literature.

The VIDIO trial4 recruited 100 patients with cCEAP 4–6 LECVI to undergo evaluation with multiplanar venogram (MPV) and IVUS to identify IFOO. IVUS identified a significant iliac or common femoral vein stenosis in 42% of the 300 vein segments (CIV, EIV, CFV) assessed. Half of these lesions were not identified with MPV. A 50% CSA stenosis was diagnosed more frequently with IVUS and resulted in treatment with stents in these severe LECVI patients. The overall patient cohort stented had a decrease in their revised Venous Clinical Severity Scores (rVCSS) at one month that persisted at six months compared to baseline (p<0.001) More specifically, patients with VLUs (i.e. cCEAP 6) and IFOO who underwent stent placement had a decrease in VLU size at 1 and 6 months compared to baseline (p=0.017) Patients with VLUs who were not stented due to no identified IFOO, did not improve at 6 months (p>0.05) in spite of continued best medical therapy. This suggests that IVUS guided treatment of IFOO can favorably address the venous pathophysiology of VLU patients, improve their LECVI and expedite ulcer healing.

Though in its infancy, the evolving venous valve technologies, require the exact measurements and detailed, and sometimes real-time, imaging available with IVUS. Though the algorithms for the use of IVUS in planning and executing venous valve interventions are still developing, the experience of the last decade has shown the advantages of IVUS in planning and performing deep vein endotherapies. The future of vein valve interventions in patients with symptomatic LECVI will likely begin with cCEAP 5 and 6 patients who have had all other forms of their LECVI  treated with limited or inadequate clinical response. Though there is clearly going to be a role for IVUS in this space, how this imaging of the deep veins will best be used will become clearer in the next few years.

What the available literature and world experience indicates is that IVUS guided stenting of IFOO can promote VLU healing in selected patients. Our understanding of which patients to evaluate for clinically meaningful IFOO is evolving, but it seems that patients with LECVI and ulceration and diffuse skin and lower extremity soft tissue injury are most likely to have a significant central vein outflow obstruction. Patients who fail to heal their VLUs after compression and appropriate superficial and perforator vein ablation are also likely to have IFOO. The potential benefit of early IVUS guided stenting in VLU patients with IFOO is to achieve expedited ulcer healing, decrease patient suffering, decrease the medical costs associated with prolonged wound care and eliminate the social costs of disability. The current literature supports evaluating chronic and recurrent VLU patients for IFOO and stenting as appropriate. However, some members of the medical community as well as payors remain skeptical to the benefit of routine IVUS guided stenting of IFOO to promote VLU healing. To evolve the management of VLUs across the spectrum of vested clinicians and payors will require a prospective randomised controlled trial (RCT) examining the added benefit of treatment with IVUS guided stenting of IFOO when compared to standard of care treatment alone. Though many vascular interventionalists believe in the benefit of stenting IFOO in VLU patients, it will require a RCT to drive this new paradigm into wound centers, societal treatment guidelines, national health plans and insurance coverage policies. Though studies to date of IVUS guided stenting have moved the ball far down the field, an RCT will move the ball across the goal line and change the paradigm.

Paul Gagne is is a vascular surgeon at The Vascular Experts Southern Connecticut Vascular Center in Darien, USA. 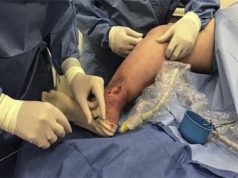