There are “significant limitations” to the use of duplex ultrasound for the initial evaluation of patients with suspected subclavian vein (SCV) thrombosis, according to the findings of a retrospective, single-centre review published in the Journal of Vascular Surgery: Venous and Lymphatic Disorders. Moreover, the investigators asserted that false-negative ultrasound studies have the potential to delay definitive imaging, thrombolysis, and further treatment for venous thoracic outlet syndrome (VTOS).

Conducted by Robert W Thompson et al (Washington University School of Medicine, St Louis, USA) at the Center for Thoracic Outlet Syndrome and the Section of Vascular Surgery, the objective of the review was to “assess both the utilisation and consequences of upper extremity duplex ultrasound in the initial diagnostic evaluation of patients with suspected SCV thrombosis and VTOS”.

A form of primary upper extremity deep vein thrombosis (UE-DVT), SCV thrombosis (or Paget-Schroetter syndrome) is caused by extrinsic compression of the central SCV “at the level of the costoclavicular space”, also known as VTOS. Although duplex ultrasound is acknowledged to be both sensitive and specific in the diagnosis of UE-DVT—and is widely considered to be the standard technique of initial evaluation for this condition—its accuracy in visualising the subclavian and brachiocephalic veins is limited by the clavicle.

As a result of this, an ultrasound may be unsuited for the early diagnosis of VTOS, “when focal central SCV obstruction has not yet led to distal thrombus extension, and its widespread use raises the likelihood that VTOS will be unrecognised and undertreated”. To address this, Thompson and colleagues’ investigation examined a series of patients who underwent surgical treatment for VTOS between 2008 and 2017.

In addition to undergoing surgical treatment for VTOS, patients included in the review must have received an upper extremity ultrasound as the initial diagnostic test. Patients with neurogenic or arterial forms of VTOS were excluded from review, as well as those persons with VTOS undergoing reoperative procedures or operations for threatened haemodialysis access. Once the 214 patients who fit these criteria were identified, the clinical and treatment characteristics of patients with both positive and false-negative ultrasound studies were compared.

Results of the study showed that there were 122 men (57%) and 92 women (43%) who presented with spontaneous idiopathic arm swelling, 28 of whom (13%) had proven pulmonary embolism. “Upper extremity ultrasound had been performed 23.8 ± 12.2 days after the onset of symptoms,” and axillary-SCV thrombosis was diagnosed in 169 patients (79%), while 45 (21%) came back with false-negative results. Only eight (18%) of the false-negative study reports acknowledged limitations in visualising the central SCV.

Furthermore, “definitive diagnostic imaging (DDI) had been obtained by upper extremity venography in 175 (82%), computed tomography angiography in 24 (11%), and magnetic resonance angiography in 15 (7%), with 142 (66%) undergoing catheter-directed axillary-SCV thrombolysis,” the findings revealed. Between the initial ultrasound and DDI, there was a mean interval of 48.9 ± 14.2 days. Although there was no significant difference between groups in this regard, it was found that patients with a positive ultrasound were more likely to have DDI within 48 hours (44% vs 24% in the false-negative group; P=0.02).

Other results of the retrospective review showed that patients with false-negative initial ultrasound studies were significantly more likely to require SCV bypass reconstruction than those with a positive ultrasound (44% vs 25%; P=0.02). Also, the SCV was widely patent following paraclavicular decompression and external venolysis alone in 74 patients (35%) at the time of surgical treatment, with patch angioplasty performed for focal SCV stenosis in 76 patients (36%) and bypass graft reconstruction for long-segment axillary-SCV occlusion in 63 (29%).

Speaking to Venous News about the results, Thompson concluded: “The results of this study strongly challenge the reliance on venous duplex ultrasound imaging in the initial assessment of subclavian vein “effort thrombosis” and suggest that it may even be detrimental.

“We would recommend that any young healthy person with sudden, spontaneous, whole arm swelling and discoloration should be suspected to have subclavian vein thrombosis due to VTOS, until proven otherwise by a contrast venogram. Venography is a better choice for initial evaluation because it also allows one to promptly undertake venous thrombolysis, a valuable step in the management of this condition prior to definitive surgical treatment.” 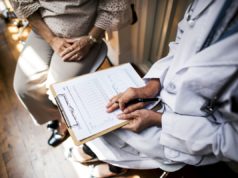