Having worked as a vascular surgeon and venous specialist in several different countries and continents, Ramesh Tripathi has a wide-ranging experience and storied career. He tells Venous News about his current areas of research, his opinion of the most important data to emerge in the last year, as well as his interests outside of medicine.

What led you to become a doctor, and why did you choose to specialise in vascular surgery and the venous field?

Growing up in India during the Cold War days, Russian literature dominated my reading. I was always intrigued about the super smart details in Anton Chekov’s short stories and plays. I discovered that he could write incisively because of his background as a physician. I confess, I fantasised being a writer and a physician like Chekov. I also chanced upon Albert Schweitzer’s book “African Notebook” in my high school library which clinched the deal for me for a career in medicine.

During my general surgical residency at the University of West Indies, I was assigned to Mr Vijay Naraynsingh, a consultant surgeon, who had recently returned after Vascular Surgery Fellowship at Albany Medical College, having made important pioneering contributions to distal bypasses for limb salvage along with Alastair Karmody. Thanks to Vijay, I was exposed to the beauty of vascular surgery from my early days. I had never seen such beautiful dissection, confident vascular control and gratifying results and I was hooked.

When I returned to India in the mid 90’s, initially, I was mainly referred patients with non-healing venous ulcers, as well-established vascular surgeons were busy dealing with arterial surgery. This was a blessing in disguise. I saw patients struggling through their difficult lives with pain, social unacceptability, economics of ulcer care and depression. I had no choice but to get involved, find solutions towards imaging, diagnosis and treatment of these venous ulcers. I am glad for the opportunity to help so many patients.

What mentors have influenced you in your career and what did you learn from them?

Vijay Narayansingh, who taught, mentored me in my early career and became a great friend in later years. “Hoppy” Brian Hopkinson in Nottingham and Michael Lawrence-Brown and Kishore Sieunarine from Perth who I learnt EVARs from, Bob Kistner from Straub Clinic, Hawaii, USA; Seshadri Raju, Mississippi, USA, Nicos Labropoulos, New York, USA and Michel Perrin, Lyon, France, advanced my career in deep venous reconstructions. They critiqued, advised and supported my techniques of Trapdoor and RIVal deep vein valvuloplasties. Frank Veith has been my global mentor helping me evolve as an international endovascular ambassador. Peter Gloviczki showed me that it is possible to be a vascular surgery “all-rounder”, giving wings to my interests in aortic, peripheral arterial, visceral and venous surgery and endovascular interventions. I cannot thank them enough for making me the surgeon I am.

What is your current research focus?

I am currently interested in failure modes of iliac vein stents; the role of endovenectomy in improving postthrombotic stenting results; and the assessment of the haemodynamic effects of endovenectomy.

In addition, I am involved with applications of 3D printing in vascular surgery especially modelling of compressive pathology of venous choke points to understand the haemodynamics of stenotic lesions. I am also interested in developing tube models by 3D visualisation and assessing flows and pressures to develop parameters for iliac vein stenting.

Which area of venous research do you think currently shows the most exciting or important developments?

Venous research has emerged as the “new frontier” and it is great that this “venous rising” has mainly embraced endovascular surgery. Despite the findings of ATTRACT Trial, the jury is still out regarding post DVT thrombolysis. I am excited about new studies to address this issue. Iliac vein stenting has become more common place and long term data are coming in. We need to establish the role of venous stents for NIVL. We also need to analyse the reasons for failure of iliac stents and whether we can improve on the design of the existing venous stents.

In the last year, which paper(s) have you found the most important for the venous field, and why?

This paper has paved the way for increased utilisation of glue for endogenous ablation for varicose veins, minimising the discomfort and need for additional anaesthesia and reducing complications from thermal injuries.

This trial is very significant because it scientifically proved an intuitive, long held concept of most venous surgeons that venous disease is progressive and early treatment will prevent long-term debilitating complications. This will have implications to resource allocation and funding for venous pathology, which has been rather poor in the NHS and health agencies worldwide, weighing heavily towards arterial disease.

This important trial confirmed for us that moderate-to-severe post-thrombotic syndrome (PTS) was significantly reduced in those patients receiving catheter directed thrombolysis. Also we need to analyse the subset of patients with iliofemoral DVT. The care of acute DVT
patients may not change significantly yet as non-randomised and smaller studies have shown benefits in patients with acute iliofemoral DVT. Unfortunately in the catheter directed thrombolysis group, many patients had no definitive corrective procedure for underlying obstructive lesions of iliac veins. Hopefully, the CAVA Trial (Catheter Versus Anticoagulation Alone for Acute Primary Ilio-Femoral DVT) will be able to answer some of the questions remaining from ATTRACT trial.

You have worked as a vascular surgeon and venous specialist in several different countries and continents. What are the main differences you have seen in practice and education across these places?

In the affluent countries, the resources are mostly readily available. So one can practice without much thought about options for patients in terms of technology and affordability for patients. In the less resourced countries, like India, with massive inequality in terms of both affordability and the technological availability adds to the stress of clinical practice. There is also the inequity of vascular surgeon to population ratios. In India, I was fortunate to work in hospitals where poor flocked to be treated free of cost through a public-private partnership. This meant that due to the higher cost of endovascular surgery, a lot of patients were treated by the traditional open techniques. The presenting pathology in patients in India is varied and far advanced leading to tremendous challenges in treating these patients. The education of training of vascular surgeons in India has mainly moved from overseas to mainland but needs more maturation to reach international standards. In Australia, the challenge is to train and motivate fellows towards venous research.

Do you think the recent outcomes of the EVRA trial will be practice-changing, and have you made any changes to your own practice?

Not really, as I have practiced its conclusions and have been an advocate for early treatment of venous diseases for the last two decades. I have seen how hard it is to heal venous ulcers, so why shouldn’t we work hard to treat it before it reaches that stage? The EVRA trial will help early referrals from GPs. Also, practice guidelines will be developed for timely diagnosis and treatment. The EVRA trial should be able to convince the funding
agencies, administrators and health policy makers to make resources available to treat symptomatic chronic venous insufficiency.

Do you consider social media an important tool for physicians for sharing of emerging research?

Of course. Social media has the potential to disseminate ideas and information to a large number of people in the shortest possible time. It is heartening to see many established players are already making use of social media to share conference highlights, new publications and opinions. More vascular surgeons need to get involved to make a real difference for conversations in vascular research. It is high time medical curricula included social media interactions from an early stage to involve surgeons in their formative years.

What advice would you give to someone interested in specialising in venous disorders?

Get involved! There couldn’t be a better time in the history of vascular surgery to be specialising in venous disorders. A lot of work needs to be done towards understanding the genesis, proteomics, haemodynamics, imaging, progression of disease and treatment
modalities. It is an exciting time!

What has been the proudest moment(s) of your career to date?

Foremost, my Dad being there when I received my medical graduation diploma and seeing his pride swell when I received University Honours in General Surgery. Doing the first EVAR in India in 1998. Being given a professorial position at the age of 37 in 1999. Setting up the first hybrid lab in India in 2011. Receiving Distinguished Fellow status of the Society for Vascular Surgery (SVS) in 2014. This year, I have been proud to receive Honorary Membership to the European Venous Forum.

What was the most memorable case of your career, and why?

There have been so many. The one I remember is a patient with a gunshot wound to the abdomen with inferior vena cava (IVC) and right iliac vein injury. I was a chief resident and my attending asked me to start the laparotomy and said he would join me. It was my first IVC repair and I was a nervous wreck throughout the case, saved only by the thought that he would come in anytime. He walked in right at the end of the case and congratulated me for doing a great job. Then I realised he was monitoring my surgery from the gallery ready to intervene if I faltered. The patient did well and I have never needed help with another IVC reconstruction in my career. I have never forgotten that night when I learnt to swim by being thrown in deep, choppy sea.

How do you prefer to spend your time outside of work?

I solve crosswords, shoot hoops on a basketball court, listen to rock, Bollywood, classical, world and Australian Aborigine music to relax. I am a cricket fanatic. I am learning to paint in the Australian Aboriginal Art form. I also enjoy travelling and trekking with my family, experiencing nature, architecture and culture of different worlds. 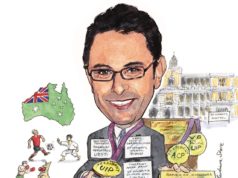