Iliac vein stents tolerate a gravid uterus well and a possible future pregnancy should not contraindicate their usage in the treatment of pelvic venous insufficiency (PVI), according to a recent press release.

According to lead author Peter Pappas (Centre for Vascular Medicine, New Jersey, USA), “The standard of care for the treatment of chronic pelvic/leg pain secondary to PVI is iliac vein stenting with or without ovarian vein embolisation. As many women receiving this therapy are of childbearing age, we assessed stent patency and re-intervention rates in women who became pregnant after undergoing iliac vein stenting.”

As reported in the March 2022 issue of the Journal of Vascular Surgery: Venous and Lymphatic Disorders, the researchers reviewed collected data from the Center for Vascular Medicine from January 2014 to December 2020.  This involved 23 centres in four states.

Surgeons placed 2,046 stents in 1,698 women during this time. From this cohort, information on 15 women with 16 iliac vein stents for PVI who had 17 pregnancies were studied.

Characteristics of the 15 patients included:

In 11 of the 17 pregnancies, patients were treated with enoxaparin. None of the women carried the diagnosis of hypercoagulability.

All patients underwent a post-partum ultrasound revealing no stent-related issues complicating any of the pregnancies. Only one patient was lost to follow up, and in the remaining 16 pregnancies, no stent occlusions were observed at an average time of 43 +/- 24 months following the pregnancy.

Pappas said, “A major unresolved question related to iliac vein stenting and pregnancy is in regard to the necessity of anticoagulation during and after pregnancy. The main indication for considering anticoagulation during and after pregnancy is the known increase in clotting factors during pregnancy, the increased incidence of venous thromboembolic events in pregnant women compared with non-pregnant women, and the fear of medical liability.”

Considering the general low risk for anticoagulation, it appears reasonable to anticoagulate pregnant patients with iliac stents who: 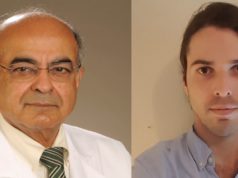