Our multicentre observational study summarises the experience of treating 2,819 trunks in 2,176 patients with 1470nm endovenous laser and radial fibres (ELVeS Radial, ELVeS Slim and ELVeS Radial 2ring; Biolitec). The final incidence of endothermal heat-induced thrombosis (EHIT) in the treated cohort was 1.41% (n=40). All patients were asymptomatic, and endothermal heat-induced thrombosis was an ultrasound finding at follow-up visits. No pulmonary embolism or other complications were encountered, and all incidences of heat-induced thrombosis resolved within a month. Therapeutic doses of low molecular weight heparin (enoxaparin) or novel oral anticoagulants (rivaroxaban) were employed in order to prevent deep vein thrombosis or venous thromboembolism and ensure safe management of EHIT.

Over recent decades, endothermal ablation of superficial venous trunks has become a first-line treatment for varicose veins. Operators in high-volume centres encounter rare complications that are important to understand and manage optimally. One such rare complication is EHIT—a protrusion of a thrombus into the lumen of deep veins following endothermal ablation. This is a rare complication with equal incidence after endovenous laser ablation and radiofrequency ablation.1 However, the clinical outcome of these patients is sometimes unclear.

Acute success was 100% with an occlusion rate of 99.93% for 1–4 days after laser ablation. Forty cases (1.41%) were later diagnosed with EHIT –class 1 in 27 cases (67%)  and class 2 in 13 (33%) according to existing EHIT classifications.2 Therapeutic dose of low-molecular-weight heparin—enoxaparin (one case)—or novel oral anticoagulants—rivaroxaban 20–30mg/day (12 cases)—were prescribed for all class 2 EHIT patients and weekly duplex ultrasound follow-up was performed until resolution. All EHIT cases resolved within 14–28 days and anticoagulant therapy was stopped because of absence of substrate for further treatment. No major or minor bleeding was detected during the anticoagulation period.

Chronological analysis of the fibre positioning distance from saphenous to deep vein junction has shown that a high ablation, small stump strategy was associated with increased rates of EHIT formation (p values defined by χ2 test).

Ovsep Manzhikian is at the Center of Laser Surgery, Moscow, Russia 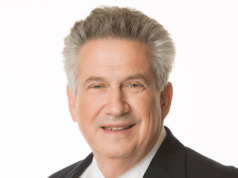