Nick Morrison chose venous medicine as he wanted a challenging career. Although he initially worried that he would become bored working in the venous field, his long and distinguished career since then is proof of the complexity and depth of the venous and endovenous space. Morrison spoke to Venous News about his current research interests and professional goals, his volunteer medical organisation, and the advice he would give to young physicians embarking on a career in venous and endovenous medicine.

I have always been a service-oriented person and medicine seemed to be the ultimate career path for me to fulfil that desire. I also wanted a challenging career, and the venous field has certainly been that! As a general surgeon performing vein stripping for many years, I wondered if I specialised in venous disorders how long it would take me to become thoroughly bored. I could not have been more wrong and ignorant in my assessment of the venous field. As most intellectually curious practitioners soon realise, there is so much more we do not know about venous disorders than what we thought we knew.

Who have been your most important career mentors and what wisdom did they impart?

Beginning in college, Fr Tim O’Brien was a tremendous motivator, keeping me on tract in my pre-med course and applications to medical school. During general surgery residency, my surgical chief Harry Hale stressed that the most important attribute of a surgeon was surgical judgement. Additionally, a paediatric surgeon, David Trump was a strong advocate for precise and efficient surgical technique. In the venous world there have been many, but perhaps the most important would be John Bergan, Hugo Partsch, JJ Guex, and Ken Myers.

The biggest development has been the advancement of imaging techniques towards greater understanding of the pathophysiology of venous disorders, closely followed by advancements in therapeutic intervention. It has been a great time to watch and even be involved in some of these advances.

Because of my position in the International Union of Phlebology (UIP), I travel extensively to international venous meetings, so it would be very difficult to identify only one, or a few papers and presentations. I do applaud recent contributions from areas in the world that either have not published much literature in the past, or did so in languages other than English, such as Eastern Europe, Asia, and South America. Some great work has been done which has gone largely unnoticed by the English-speaking community.

Patients with pelvic venous insufficiency are a vastly underdiagnosed and underserved demographic. I am encouraged by the research ongoing in that field. And of course the newer non-thermal non-tumescent endovenous systems are of great interest and I continually look for further developments of even less invasive modalities.

Where do you stand on the debate between using foam sclerotherapy, thermal and non-thermal methods for treating varicose veins? What about surgery?

We currently use all three modalities and I think they all have their appropriate applications for superficial venous disorders. Internationally, surgery continues to play a dominant role, primarily because of the expense of the newer methods of treatment. In the USA and elsewhere, however, surgery has a very limited role. In reality, with ultrasound guided tumescent anaesthesia and invagination stripping, the surgeon can deliver very good care, with very similar recovery and patientreported outcomes at a fraction of the cost of the newer techniques. As these surgical techniques have been refined, I do not believe venous surgery internationally will disappear, but probably will become less dominant. I do not see a return to surgery for varicose vein disease in the USA and elsewhere as the newer modalities have been introduced.

What achievements have you been proud of in your time as the current President of the UIP?

The main objectives for my presidency are: Recruit phlebologists who are sincerely interested in working for the UIP to advance the field of phlebology; development of a UIP Foundation to support educational and humanitarian projects; and restructuring of the UIP Congresses so that the UIP takes on the scientific and fiscal responsibility for its own meetings. Currently the hosting UIP member society bears the full burden of all UIP World Congresses and Chapter meetings which can severely limit the ability of smaller societies to host a UIP meeting. This restructuring will encourage even small societies to compete for UIP meetings. If I can achieve these three things I will be very happy.

What will be the main focuses of the UIP 2018 meeting in Melbourne? Are there any topics that particularly excite you?

There will truly something for everyone, as the saying goes, and the scientific level is promised by Kurosh Parsi, programme president, to be second to none. From basic phlebology/lymphology tutorials to hands-on workshops to masterclasses and live broadcasts of venous and lymphatic diagnostic and therapeutic interventions—there will truly be something for all phlebologists/lymphologists of any experience level. I must also mention the venue. Melbourne is a wonderful city to visit, routinely appearing at the top of the most “liveable” cities in the world lists. The convention centre is conveniently located within walking distance of a wide variety of hotels and restaurants directly next to the Yarra River. Kurosh Parsi has planned an inclusive, “over-the-top” social programme and official UIP ceremonies like nothing we get to experience during most medical meetings. There will be extensive opportunities to enjoy Melbourne and reconnect with friends and colleagues in beautiful “down under” summer weather.

When conducting the activities of the volunteer organisation, Amigos de Salud, what are the greatest challenges you come up against?

Trying to help our nurses do all of the logistical work needed to have a successful trip—they usually just tell me to stay out of their way! Seriously, it is sometimes challenging to get all of our equipment through customs without “losing” it. The clinic with which we have worked for the past six years—Fara Clinica—established through the Fara Foundation by Manny and Maria Farahani, is incredibly helpful and our trips would be absolutely impossible without their assistance. But it is never a challenge to find volunteers to go, companies to donate equipment, or patients to treat; the need is huge, as are the hearts of all volunteers not just in the USA but also internationally.

Could you tell us about one of your most memorable cases? What did this experience teach you?

An older gentleman presented to the clinic with severe bilateral circumferential leg ulcers of 30 years’ duration. Duplex examination showed no evidence of deep venous disease—only superficial insufficiency. When asked if he wanted treatment he said yes, so we proceeded to treat his superficial disease. We saw him once before we left and re-dressed his wounds, which were clean and healing with the expert compression bandaging applied by Giovanni Mosti. The patient was next seen by a colleague who worked in the same clinic as we did two weeks later. I asked how the patient was doing and our colleague reported that he saw the patient sitting on a sidewalk in the city with his bandages removed, revealing his large ulcerations, and begging for money on the basis of his venous ulcers. It was then I realised that we may have taken away his livelihood with our treatment. Things are often not what they seem on the surface.

Volunteer in the medical association of your choice. Great things can be accomplished by associations filled with people who understand the importance of serving patients over serving oneself. And finally, get outdoors and enjoy nature— it is the best therapy for body, mind, and spirit!

What are some of your hobbies and interests outside of medicine?

Diplomate, American Board of Venous and Lymphatic Medicine

1978 American Board of Surgery 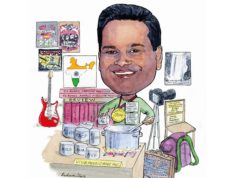