PolarityTE has announced results from a multicentre randomised controlled trial (RCT) evaluating treatment of venous leg ulcers (VLUs) with its investigational product SkinTE plus standard of care versus standard of care alone. The trial met the primary endpoint of wound closure at 12 weeks and secondary endpoint of percent area reduction at four, six, eight, 10 and 12 weeks.

PolarityTE started this multicentre RCT with a target enrolment of 100 patients, but decided in the first quarter of 2021 to suspend the trial after 29 patients were enrolled because the company believed that its resources would be better used in future clinical trials conducted under an open investigational new drug application (IND) that can be used in its eventual planned biologics license application (BLA) submission. Since that time, PolarityTE has received US Food and Drug Administration (FDA) approval of its IND for the proposed indication of chronic cutaneous ulcers. PolarityTE plans to conduct its first pivotal study under the IND in diabetic foot ulcers and is evaluating additional wound types—including but not limited to VLUs—for its second planned pivotal study that is expected to be required for a BLA submission.

Nikolai Sopko, PolarityTE’s chief scientific officer, commented: “VLUs are the most common chronic lower extremity cutaneous ulcers of the leg, accounting for approximately 80% of leg ulcers. It is estimated that 1% of the western population will suffer from a VLU in their lifetime, and the incidence and prevalence of VLUs continue to increase with an ageing population. We believe that these data strongly support the potential of SkinTE to deliver meaningful and positive outcomes for VLU patients and their healthcare providers who are seeking solutions to these highly prevalent and debilitating wounds.” 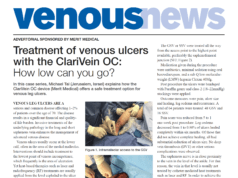